Achievements:  Stevie joined us in Australia in June 2014, bred by Vandra Huber and Michael Kroleweski the world famous Scottish Terrier Kennel ‘McVans’. We know we were very lucky to get Stevie for which we will always thank Vandra and Michael. Stevie started his career in Australia with a bang and finished off his Australian title very quickly, winning his first BIS within  6 weeks of getting out of quarantine.  He achieved his Supreme Champion title in January 2016 with many BIG wins, another BIS and achieving Australia’s top Scottish Terrier (DOL Pointscore) 2014 and 2015. He was then retired to make way for his children to take over. Stevie is at stud to quality bitches and we are thrilled with the puppies he is producing. So far he has produced 1 Supreme Champion, 4 Champions including a BISS winner and 3 other BIG winners. 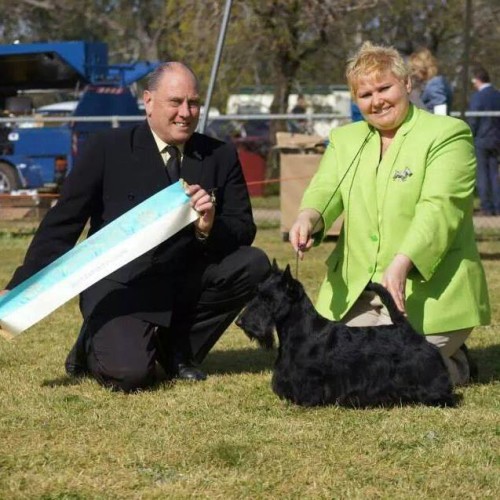